Sri Lanka faces an unprecedented pollution crisis as waves of plastic waste from a burning container ship hit the coast and threaten to devastate the local environment, a top environment official warns.

Thousands of navy sailors have been using mechanical diggers at beaches to scoop up tons of tiny plastic granules that have come from the Singapore-registered MV X-Press Pearl, which has been smoldering on the horizon for 10 days.

The tiny polyethylene pellets threaten beaches popular with tourists as well as shallow waters used by fish to breed.

Fishing has been banned along an 80-kilometer stretch of coast near the ship that has been burning for 10 days despite an international firefighting operation.

"There is smoke and intermittent flames seen from the ship," navy spokesman Captain Indika de Silva said. Orange-colored plastic booms were set up in case oil leaks from the crippled ship reached Negombo Lagoon, which is famed for its crabs and jumbo prawns.

Plastic pollution in the ocean

Plastic pollution has become one of the most pressing environmental issues, as rapidly increasing production of disposable plastic products overwhelms the world’s ability to deal with them. Plastic pollution is most visible in developing Asian and African nations, where garbage collection systems are often inefficient or nonexistent. But the developed world, especially in countries with low recycling rates, also has trouble properly collecting discarded plastics. Plastic trash has become so ubiquitous it has prompted efforts to write a global treaty negotiated by the United Nations.

Most of the plastic trash in the oceans, Earth’s last sink, flows from land. Trash is also carried to sea by major rivers, which act as conveyor belts, picking up more and more trash as they move downstream. Once at sea, much of the plastic trash remains in coastal waters. But once caught up in ocean currents, it can be transported around the world.

Once at sea, sunlight, wind, and wave action break down plastic waste into small particles, often less than one-fifth of an inch across. These so-called microplastics are spread throughout the water column and have been found in every corner of the globe, from Mount Everest, the highest peak, to the Mariana Trench, the deepest trough. 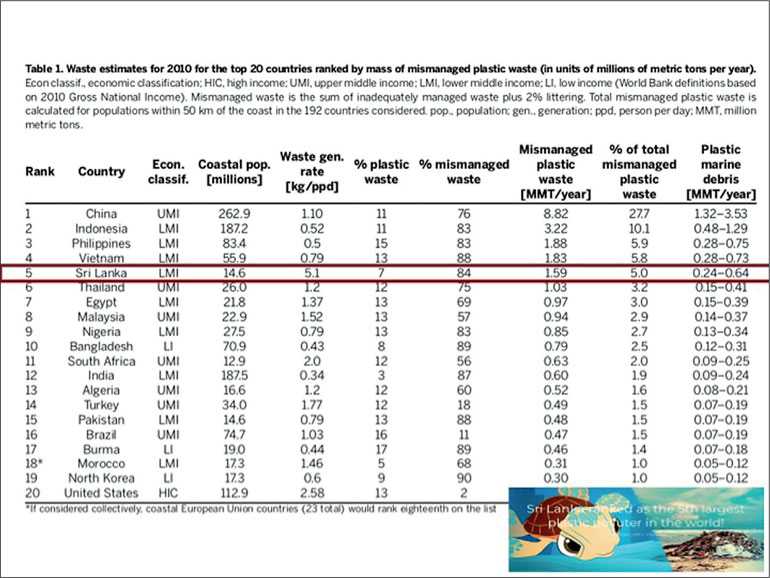 Figure 1:  The paper in the data table indicates that Sri Lanka generates 5.1 kg of waste per person per day and 7% of waste being plastics. The extent of waste mismanagement is assessed to be 84%.

How much personal consumption influences the environment

Just stop for a second and look around, wherever we are, almost all the objects around us are made of plastic, but how did we get to this point?

The first plastic made from fossil fuels was invented a little over a hundred years ago, becoming commonplace after the Second World War, with its production taking off around 1950. Today we are left with 9.2 billion tons of material to manage. Of these, 6.3 billion tons become waste that will never reach a separate collection bin.

Everyone of us should just need to take care a little bit more of his or her personal consumption. Purchasing sustainable products, avoiding plastic items and having a better look at the waste management in the household is fundamental to reduce the global waste disease.

It is estimated that by 2050 the weight of plastics present in the seas will be greater than that of fish. Every year from 5 to 13 tons of plastic ends up in the oceans, reaching a total of about 150 million tons to date.

The convenience plastics offer, however, led to a throw-away culture that reveals the material’s dark side: today, single-use plastics account for 40 percent of the plastic produced every year. Many of these products, such as plastic bags and food wrappers, have a lifespan of mere minutes to hours, yet they may persist in the environment for hundreds of years.

We just need one moment more of reflection in our everyday life, to make a big change in the world.

Get access to latest news and all the features by subcribing here.

Manage Cookie Consent
To provide the best experiences, we use technologies like cookies to store and/or access device information. Consenting to these technologies will allow us to process data such as browsing behavior or unique IDs on this site. Not consenting or withdrawing consent, may adversely affect certain features and functions.
Manage options Manage services Manage vendors Read more about these purposes
View preferences
{title} {title} {title}